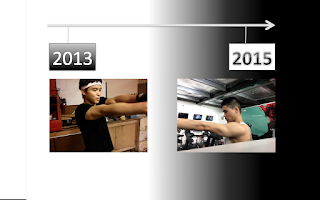 2012-2013 is where I began my physical training and made it a habit. When I was younger than I was in 2012-2013, I did train physically to get in shape but it's transient (sometimes I would train for a bit then stop. I didn't made my workout a habit like what I am doing now. I would train then stop multiple times throughout the year that I can't keep track of how many times I did that. Maybe like every 3 weeks I would train? I cannot remember, but something like that).

Now is 2016 and unfortunately I don't have a photo of myself at this time, doing the same pose. I'll probably do one later this year. I will finish off by saying that in order to transform yourself you need to make your activities or the things that you do to achieve something (method of achieving) a HABIT.

I'll share a story from a book I've read. (in fact I'll copy and paste it. I will give reference so I don't plagiarise.

Todd Kuslikis stated: "I will never forget a story I heard while I was in personal training school. It was about a woman that needed to lose a lot of weight. She knew the power of habits and decided to change her life around.


For the first week of her new plan she set her alarm for the time that she wanted to workout in the morning. Then each day when the alarm went off she turned it off and went back to bed. She considered it a goal met. The second week she set a goal of getting out of bed when her alarm went off and take out her workout clothes out of her drawer and set them on the dresser. Then she was to go back to bed. After she did this for a week, she set a goal for the third week of actually putting the clothes on. She would put her workout clothes on when her alarm went off and then took them off and went back to bed.


The forth week she actually drove to the gym each day but didn’t even go in. The second month is when she actually stepped into the gym. And guess what? It was easy. She had created the habit.

Over the course of the next year, she lost over 100 pounds. She implemented the Habit of Self-Dominance. She needed little to no willpower to achieve her goal. She just pushed the habit down the hill until it started to go on its own." (Todd Kuslikis, Isometric Strength Ebook, 51-52 page, 2014)